Five years into working with farmer groups, fishing groups and livestock owners in Terekeka Central, Muni and Tombek Payams (Districts) of Terekeka County, ACORD is increasingly witnessing the communities embracing other livelihoods activities to improve their food security and income. The communities in Terekeka are predominantly agro-pastoralist, although they largely practice pastoralism with little emphasis on agriculture.

Most of the indigenous people of the county have lived in confinement of their areas of origin throughout the successive wars with limited access to social interaction with other Southern Sudanese. The culture of cattle rustling is widespread that majority of the youth get involved in the practice since they would use cattle raided for payment of dowry. Women are not allowed to participate in community events and gatherings because their cultures do not allow women to do so and, even if they do, they do not decide on community issues.
Last year alone, ACORD was able to mobilise and support 96 farming and fishing groups, each group comprise 25 members with 40 per cent female composition. The purpose was to increase agriculture and fishery productivity, resulting into improved livelihoods. In addition, ACORD constructed 10 boreholes to support better livelihoods of the participating communities, which resulted in not only livelihoods diversification but also reduction in cases of conflicts arising from water scarcity and water-related diseases in the beneficiary community. 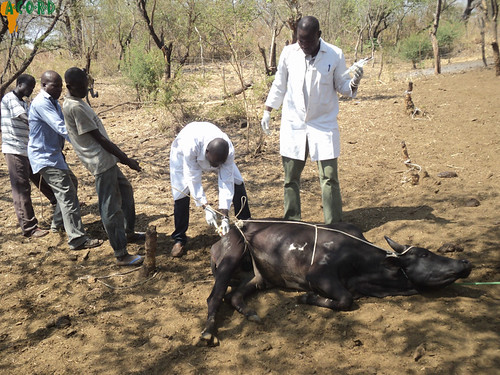 (Harambe farmer leader (middle) takes the food security officer (at the far right) through the farm in one of the monitoring visits.)
ACORD also supported livestock owners with veterinary drugs that are administered by the State Ministry of Agriculture, Forestry and Animal Resources staff through the county veterinary department. James Wani, the secretary of the livestock group in Tombek Payam, Terekeka County, applauded the efforts of ACORD in reducing poverty in the community.
“ACORD has helped us a lot using the veterinary drugs and the training offered to the animal health workers,” he says. “We can now identify diseases and treat our goats, cattle and other domestic animals and poultry without going very far in search of drugs for our animals; besides, most of the people would not have afforded it.”

Fishing groups are also supported through provision of fishing gear through Loyi and Sernum Fishery Co-operatives who continue to register huge number of youths joining fishing. Paul Modi Aguta, chairman of Loyi Fishery Co-operative, appreciated the advisory and material support provided to them by ACORD. 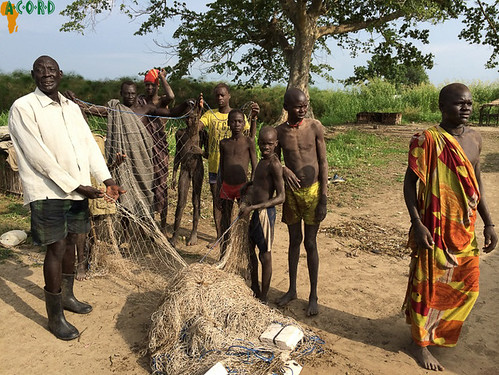 (Modi in white shirt and his boys with a fishnet he made after receiving the twines from ACORD.) Modi, who had never had any formal education, has four wives and over 10 children. He also takes care of orphans whose parents died as a result of cattle rustling and other vulnerable youths and children who he eventually trains on fishing. He explains that some children used to steal because of hunger but not anymore because once they reach him at the landing site, there is abundant food and he keeps them busy fishing in the river. As a result, some do not want to return home or to the markets for those who do have homes.  He said traditionally, the Mundari, the indigenous ethnic group of Terekeka County, rears cattle and grows only groundnuts.
“However, today the Mundari are diversifying their livelihoods with the help of organizations like ACORD who continue to discourage superstition and paranoid about certain livelihoods activities in the community,” he says.
He added that he has seven children in school, with four studying secondary level of education in Uganda and Juba, while three are studying in Terekeka.